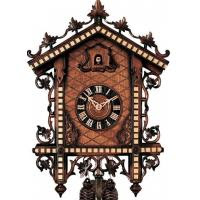 As we all know by now, it was during the mid 1700s that the world famous cuckoo clock, famed for its beauty and craftsmanship, originated in the deep and cold black forest region of Germany and Bavaria. This writing is a discussion of the high quality 8 day cuckoo clock.

Cuckoo clock lovers choose the 8 day cuckoo clock for its antique value and quality. These clocks are needed to be rewind every 8 days. When the clock strikes a full hour, the uniquely crafted door will open and the cuckoo bird will call out the number of hours.

For example, the cuckoo bird will croon 5 times when it's 5 o' clock. The bird also announces the half hour as the clock strikes.

Every hour, a cuckoo bird will come out of its gate and announce the number of hours. This is usually followed by a special melody. As the clock strikes the half hour, the cuckoo bird will call out once by a different melody. A rotating drum is used to alternative different tunes every hour.

In the musical 8 day cuckoo clock, M indicates music, while 8 or A indicates the 8 day mechanical movement. You may also find a T sign that denotes movable objects like animals, water mills, moving dancers or other things that can turn or move.
Posted by DesignStyleGuide at 7:45 AM