One Step At A Time

In 1977, I ordered a "Grandmother's Flower Garden" quilt kit from a woman's magazine. I remember the color scheme was Harvest Gold and Avocado Green, like everything else those days! When the kit arrived I was completely overwhelmed by the sheer number of pre-cut hexagons. At the time I didn't know any quilters, had never heard of a quilt shop, and had never seen a quilting-how-to book. I put the kit in a drawer, thinking that "someday" I would make it. Well, that project was never finished (okay, it was never even started!) but the desire to learn quilting persisted.

Then twelve years ago, during a particularly dark period in my life, I challenged myself to learn something new, something positive, something that might spark a little light in me. I saw a newspaper ad for a beginner's block-piecing class at a local quilt shop, and forced myself to register. That first day, when I walked into the shop, I felt immediately at home. Like many quilt shops I've visited since then, this one was located in the old part of town, in what we now call a "re-purposed" building. Whether in an old house, bank, inn or barn, these shops are invariably warm and cozy. Every nook and cranny is filled with fabric bolts, threads, patterns, and packets of "fat quarters." Sewing/quilting tools hang on pegboards, and sample quilts cover every inch of wall space. Shop owners and assistants never fail to welcome newcomers, and are happy to answer questions and offer advice. There is virtually no way to feel depressed in a quilt shop! I was instantly hooked. The photo below shows my small quilt from that first class, pieced and quilted entirely by hand. 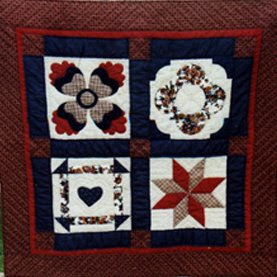 The bonus was that in the process of creating an actual, physical item, I felt powerfully uplifted. Since then I've heard similar stories from many fellow quilters. For us, quilting is a form of therapy -- almost a meditation. You can witness this on a mass scale during times of acute crisis. If you ever get the chance, visit the 9/11 quilts, or the AIDS quilts, or Hurricane Katrina quilts. In all of these, many, many blocks are submitted from quilters around the world, and assembled together to honor those who have died. On a smaller scale, most quilters donate quilts to a local charity, like a childrens hospital or rescue service.

My second class was hand-applique and hand-quilting, and resulted in the quilt below, which now hangs over a banister in my home. 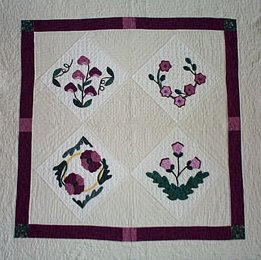 I also made a few baby quilts during those early years, still all hand work. It was the next quilt that marked some huge changes for me: I was gaining confidence in my ability, I joined a large guild for quilters, I started collecting fabric. I had previously bought only enough fabric for the project at hand. I had heard quilters talking about their fabric "stashes," but I didn't even know what that meant. Then my daughter asked me to make a queen-sized quilt for her. The block pattern she chose was a fairly simple star, but she wanted it to be a "charm" quilt. In a charm, each individual piece must be a different fabric; a queen-size charm in the star she liked would need over 1600 fabric pieces! I became a frequent visitor to every shop in a three state area. It took almost a year to collect enough to even begin piecing the first stars. Then I discovered online fabric sources, and became addicted to them. That sped the process up, but I was still piecing, quilting and binding entirely by hand, and Lisa's quilt took almost three years to complete. But I learned an important lesson with that quilt. In the beginning it seemed like an impossible task --- almost like the long ago hexagon kit that never got done. But this time around I realized this: I could only cut and piece one star block at a time. I did this regularly, and eventually I had enough blocks to make a row. I kept going until I had enough rows to make the main part of the quilt. Then I added borders and basted the top, batting and backing together. Finally, stitch by stitch, I quilted the layers together. Approaching the project as a whole was overwhelming. But breaking it down into achievable goals led to a really special final result. (See photos below.) This has of become my mantra, in life as well as in quiltmaking. 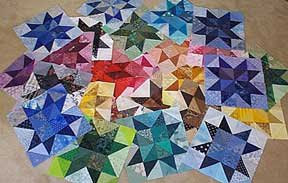 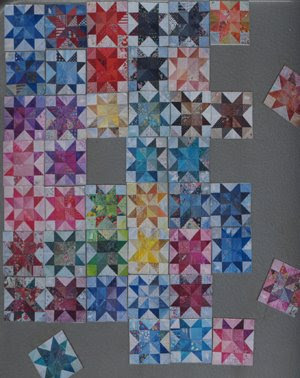 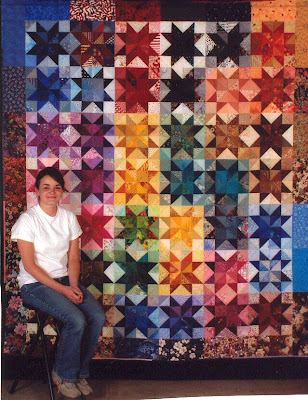 Lisa's quilt was the last one I made entirely by hand. After hers, I had a fabric stash to die for, and dozens of new projects dancing around in my head! There was no way to get them all done unless I switched to working by machine. I really resisted this for awhile, stuck on the idea that "real" quilters work only by hand. That was true back on the prairie, but few quilters work that way today. In fact, many only sew the top of the quilt, then send it off to be quilted professionally. The pro usually has a huge, long-arm machine, often computer-guided. They do beautiful work. But I like my one-step-a-time = finished quilt approach. Luckily the quilt world is now big enough for all of us!

I now have a sewing machine and a mid-arm machine on a 10 foot rack. No computers, but I can finish a large quilt in a week or two, rather than a year or two. Three years ago I started selling quilts locally, and then online. It's the best job in the world! I still can't live long enough to finish all of the projects I want to tackle, but hopefully most of them. I'm still learning something with each project, and continue to take the occasional class to update techniques and network with other quilters. I get inspiration from other quilters, workshops, books, and magazines. Most often, though, it's fabric that initially excites me; I especially like using the same fabric design in different colorways. Looking for the perfect block and layout to dramatize particular fabrics is what drives me.

You can find more of my work online at Quilts With Heart, or my DSG Profile Page. You can learn more about me, personally, on my blog.

See Also: Our Exlusive Interviews
Posted by Kathy Norton at 12:40 AM

Love your post, it really kept me reading, and your quilts are beautiful!

Quilting is a more rewarding experience than most people would realize. You've certainly did a good job at it too.

Thank you so much for sharing your story with us. What a beautiful and inspiring story.

What a great story! You make me want to learn how to quilt. Beautiful quilts.

Thank you for sharing your story about your love affair with creating quilts! Your quilts are awesome!

I loved reading about your quilting experiences. My mom quilts, too, and has given me some fabulous ones that I treasure. Great story.

Kathy - this is a wonderful story!! It has me wondering what IS my story?

I love quilts and it is a pleasure to see yours! Thank you!

It is so nice to see that your period of darkness is now bringing so much light to us all. There seems to be such wonderful stories behind the art of quilting and its artists. The one on one time with your art, your thoughts and simply being can only bring about beauty in its purest form. Your work is beautiful and thank you for your story.